The Xtreme Hunter Tournament is now running. All XHT matches will be recorded and uploaded to our YouTube channel, so make sure you don't miss any details and follow us on our social networks!
Information & Registration Bracket & Schedule Discord YouTube
News Ticker

Hello and welcome to the first Development News thread.
It's been more than a month since 2018 started. With the start of year, by us, many promises were made to be fulfilled, aims were set to be obtained and goals were thought to be achieved in the new year. Let's wish ourselves best of luck with them. Just like everyone, we, the members of XpR, made many promises and a part of them was related to our clan - Xtreme Pro Racers.

More or less, it's been more than 6 years since the clan was first opened and from the same amount of time every single member has been doing the best for the clan. At present, our team consists of the most experienced members around the game. We've always mainly focused on being the best in game and we're really proud that XpR is undoubtedly one of the most skilled teams of MTA now but for the very first time in the history of clan, we've decided to focus on the other side AS WELL - betterment of the clan's development side!

Innovators
Without any wait, let me introduce you to the few chosen clan members who will specifically be more attentive to development of our Server and Website by providing brand new ideas and/or working on them. These determined individuals are given a little tag of Innovators:

Above 7 members are the very first innovators. Amount will be increased and decreased from time to time depending upon the activity, creativity, skills in development and mindfulness of members.

Server 3.0
The main motive of this thread was to publicly introduce a little of our upcoming server - Xtreme Pro Racers Deathmatch Server 3.0!
The project was mainly started after the mid of 2017 but then due to some other unexpected difficulties, we weren't able to keep our attention towards it. Later on, the project was put into shape by the XpR's development crew and we started working on it with full speed but recently, once again, unfortunately and unexpectedly we started facing difficulties due to mine and one of our developers' inactivity.
The very first level of the project was Designing the server completely and you're going to see only the designed visual form of our upcoming 3.0 server yet. In the start, we had complications in bringing new and different designs up but later on with the support of all clan members and not only the dev. crew, we got on the right path! Although, some time might be taken for our server to be fully developed but we decided to bring into daylight a little. Let's start!

Login Panel
The very first thing that was taken into consideration on starting the Design stage was Login Panel. To me, login panel is the basic and most important thing for a server, not because it let's you log in but because it's the very first impression that is made on anyone who joins the server. It took me a bit of time and a few attempts to bring up a really nice, simple, elegant looking and different design.
Our login panel is really not complicated. We tried to keep it as simple and easy-to-use as possible and I believe we have succeeded. The login panel let's you join the server simply as a member or as a guest but the ability to register wasn't kept with it in order to let people get in contact with our website. As you can see, the login panel mostly consists of multiple shades of Black/Grey since they're our main colors and Red - Our new secondary color #CA2424 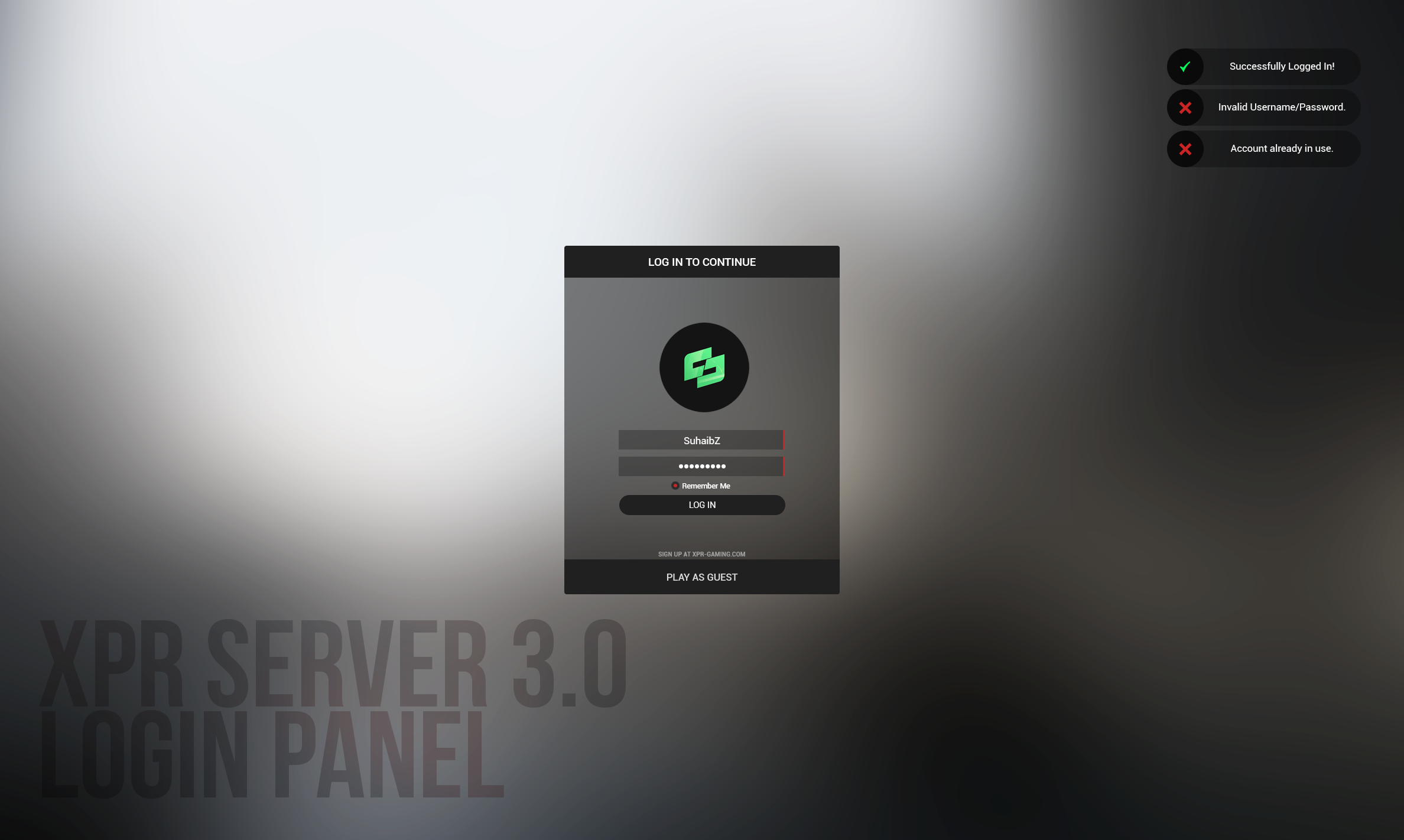 Race Interface
The race interface, consisting of Radar, Deathlist, Time left, Speed, Nos and Health, had been designed with full cooperation of clan members. It took me a few days and many edits to complete the interface successfully with the help of my innovative team. We tried our best to bring a new and different thing and we all are really satisfied with the result!
I don't have any further explanations about race interface, just that we tried to keep it simple and unique. Functions and abilities will be discussed later on in next development news threads. 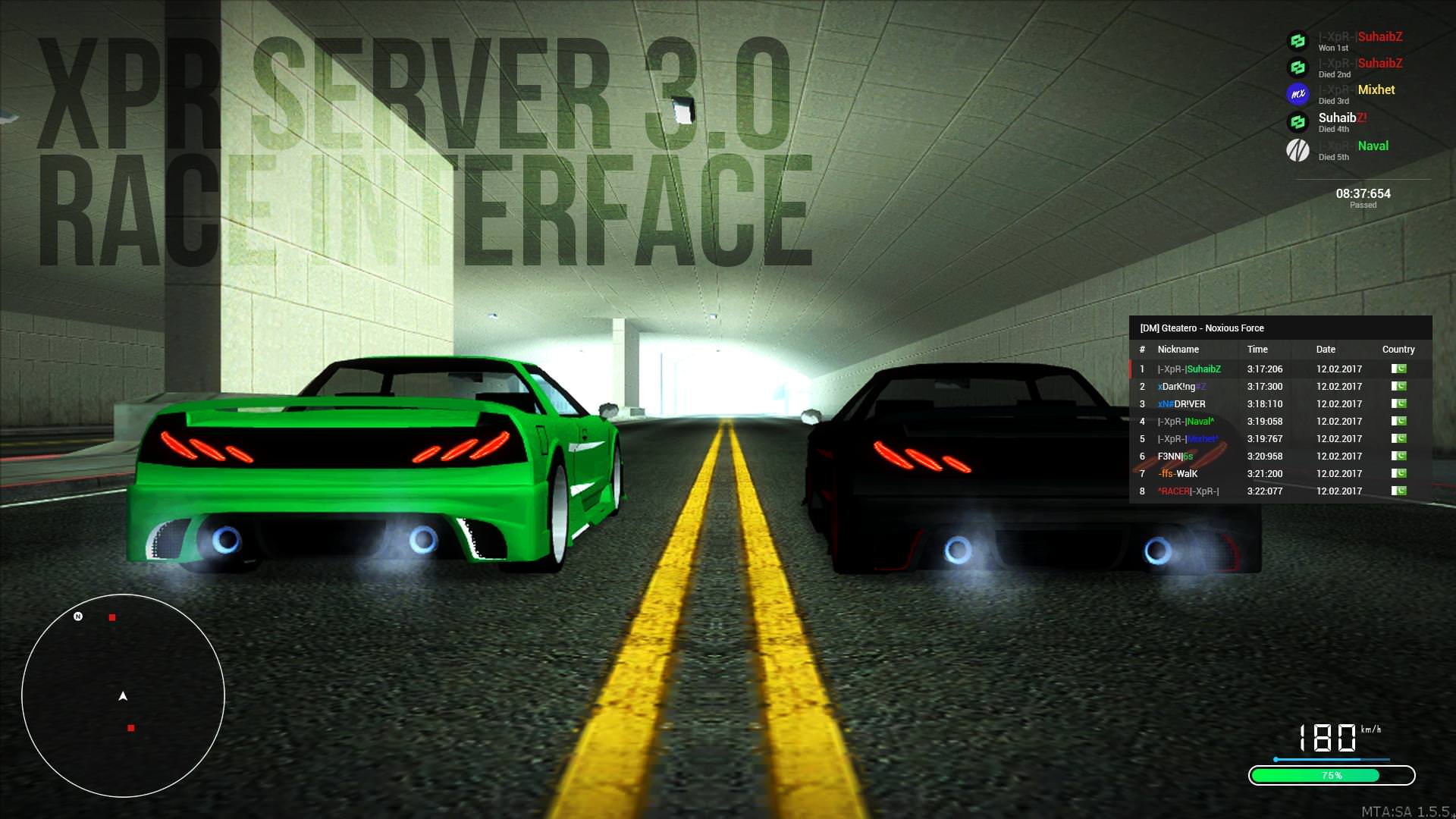 Scoreboard:
Being honest, scoreboard was one of my biggest fears and I never really thought I'd succeed in designing a good one. This one I got took me a week in total. As the teammates say, I really do hope we did good with it. We believe that we succeeded in keeping it as simple as possible. There's nothing much of special in it, just that base looks really clean, it has the same functions as that of stock scoreboards but who knows, special abilities may be added, take a look at it! 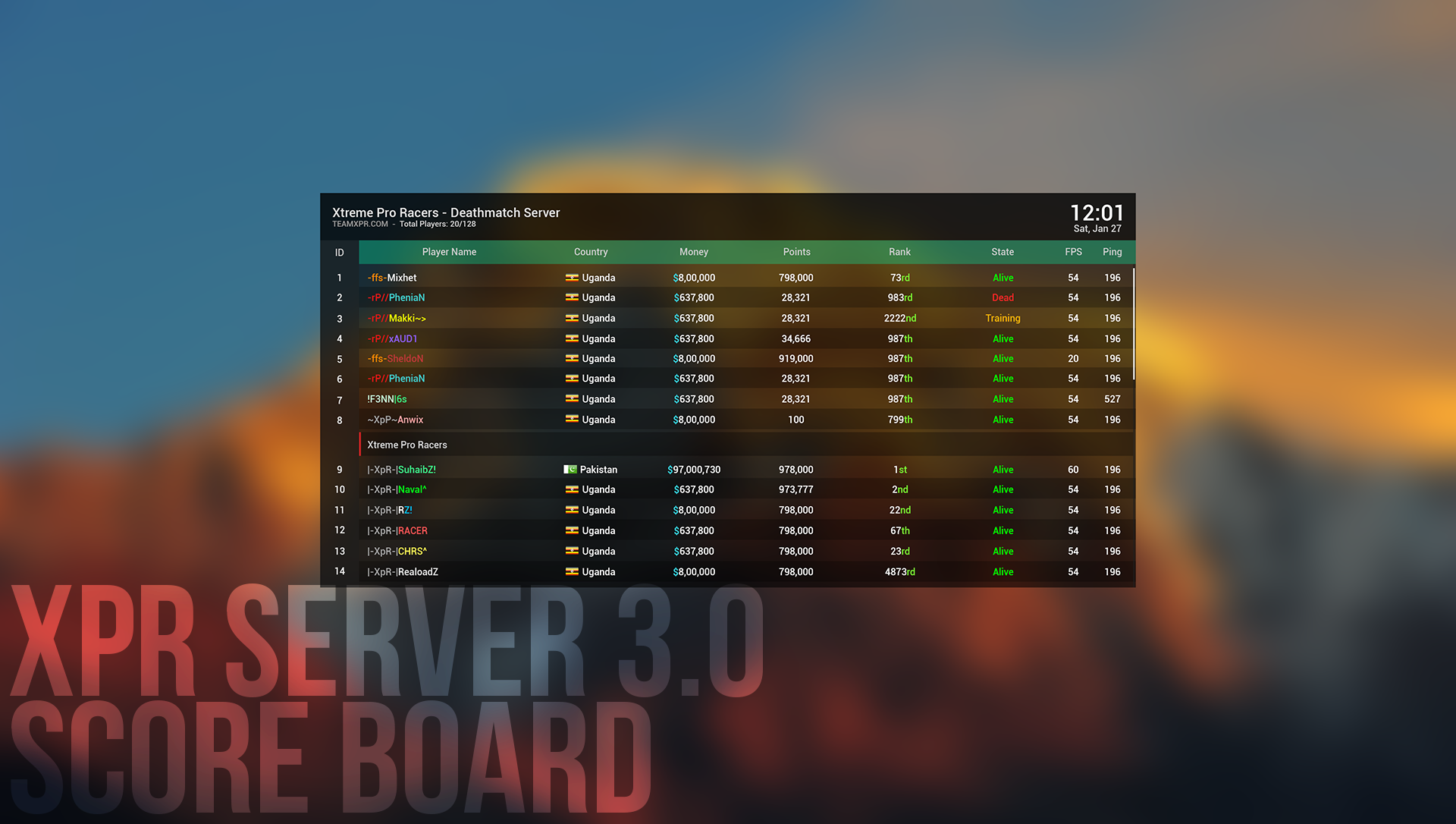 Clan Wars Server Design
How could we forget about our Clan Wars server? It was one of our top priorities! Here I present to you our newly designed Clan War server Team Selection menu and main Panel design 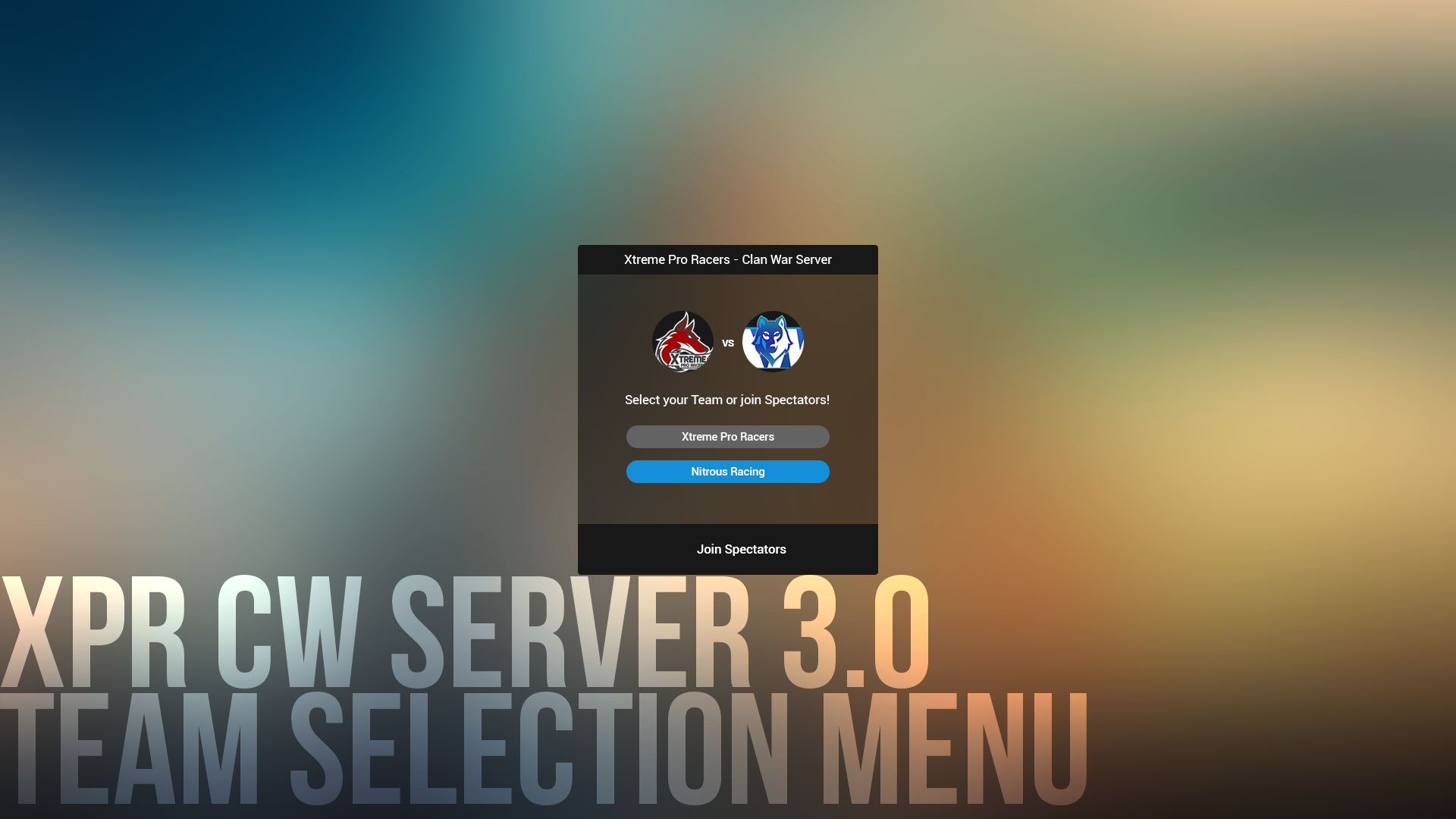 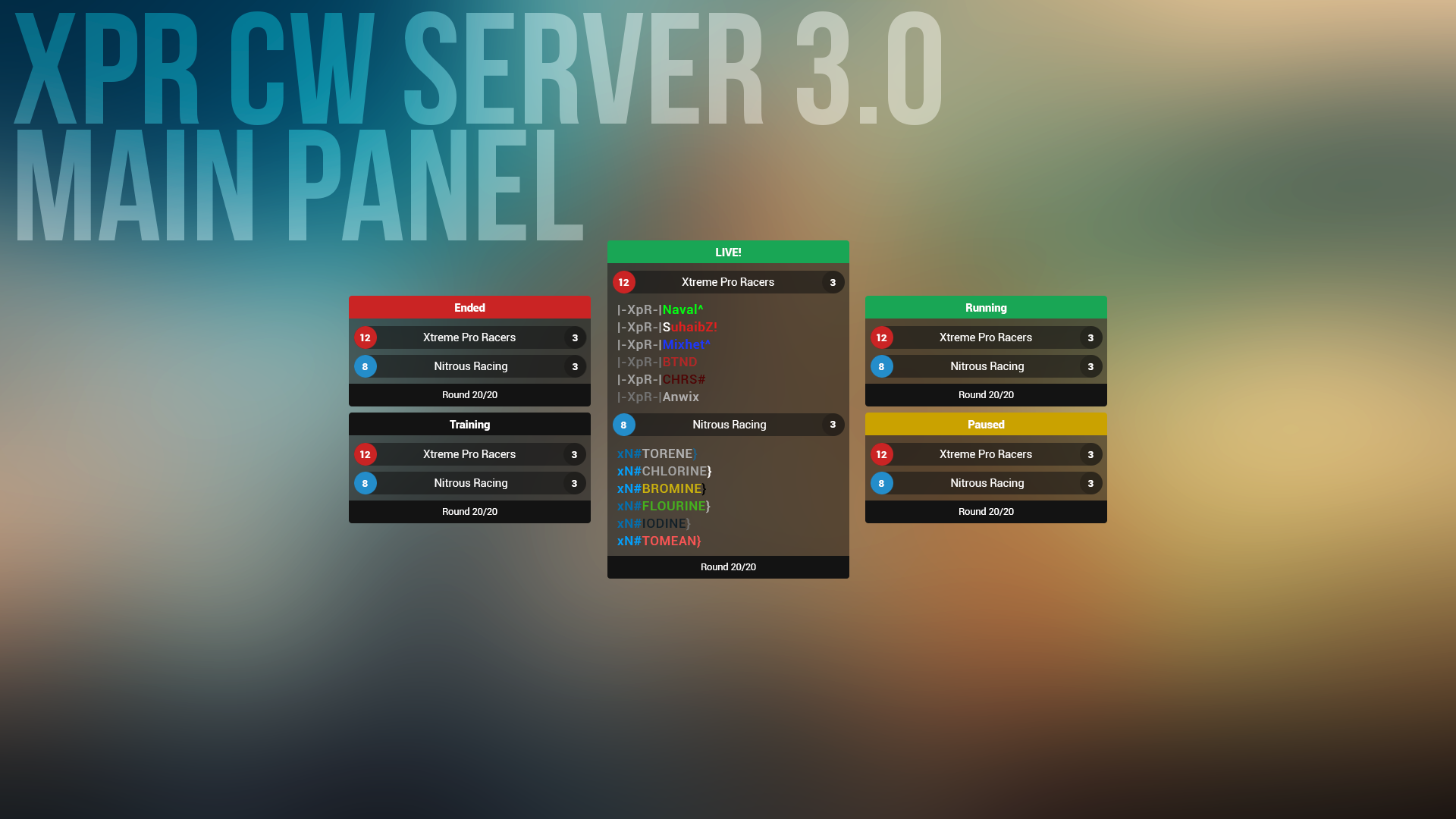 That's all for now! Fact that has to be kept in mind is that changes might be made in the designs above and the actual live developed one may differ a little bit due to development and programming complications but we'll be trying our best to provide you the greatest final output and best Deathmatch experience on our server. That being said, Good Night to all of you, we'll see you soon with ummmm...oh, yeah, with a great tournament announcement! Prepare your asses ; )